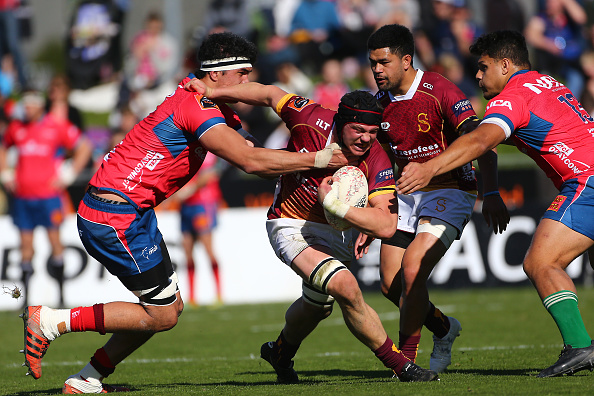 Phil Halder in action vs Tasman. Image via Getty Images

The Marist loose forward missed last week’s loss to Northland with a medial knee injury, but is a timely addition as coach Dave Hewett plots to steal the log of wood away from the Mooloo men.

“He’s an important part of this team and it’s great to have him back,” Hewett said.

James Wilson continues to improve from the tight hamstring which saw him limp out of the game against the Taniwha and has been named at centre for the first time this season.

“We are giving James every chance to play and he’s trending in the right direction,” Hewett said.

“Due to other circumstances he’s had to play a lot at 10 this season and that’s not his preferred position so it’s good to give him an opportunity in the midfield. Ray Nu’u deserves a chance at second five and I’m keen to see how that combination of (first five) Broc Hooper, Ray and James goes.”

The Stags will also be without co-captain Flynn Thomas for up to four weeks due to ongoing shoulder problems.

“We’ve had advice from his specialist that he needs to have four weeks off and it’s important that we consider his future,” Hewett said.

“We are lucky that we have able replacements in the form of Jesse MacDonald and Andrew Ready ready to go.”

Halder’s return had prompted a reshuffle in the loose forwards with Tony Lamborn swapping sides of the scrum and Jack Capil falling back to the bench.

Tauasosi Tuimavave has been included at fullback after being a late scratching against Northland.

The full side for the match which kicks off at 2:35 Saturday afternoon is: